Susan Wojcicki, CEO of YouTube: A 'Sputnik' moment for women in technology

Susan Wojcicki, CEO of YouTube: A ‘Sputnik’ moment for women in technology

(From CNN.com)
My daughter was 10 years old when she told me she hated computers.

As someone who has spent her career helping build one of the largest tech companies in the world, I was in shock. Suddenly an issue I faced repeatedly at work — the lack of women in tech — hit squarely at home.

The story may sound familiar: We had one computer at home and in my daughter’s words, my son “had conquered it.” For good measure, she added that it was “super lame” to like computers and she had better things to do in her busy life.

Today, this same pattern is playing out in homes throughout America. Girls are being left out of the conversation when it comes to technology, led to think of tech as insular and antisocial without ever being given a chance to correct those perceptions.

Despite earning the majority of bachelor’s degrees, women earn only 12.9% of computer science degrees, according to the Computing Research Association. These statistics have serious implications for our economy and for women at large. By 2020, jobs in computer science are expected to grow nearly two times faster than the national average, totaling nearly 5 million jobs. Yet today, women hold only 26% of all tech jobs, according to the American Association of University Women.

The fact that women represent such a small portion of the tech workforce shouldn’t just be a wake-up call — it should be a Sputnik moment. The tech industry is not America’s future; it is our present. From manufacturing to health care to agriculture to the arts, technology is revolutionizing every industry at an unprecedented pace, remaking the world in its wake.

If women don’t participate in tech, with its massive prominence in our lives and society, we risk losing many of the economic, political and social gains we have made over decades.

If women don’t participate in tech, with its massive prominence in our lives and society, we risk losing many of the economic, political and social gains we have made over decades. We’d be setting ourselves back in an era when we should be solidifying and strengthening our progress.

READ THE FULL STORY AT CNN.COM 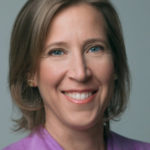 Susan Wojcicki is CEO of YouTube. She was previously senior vice president of advertising and commerce at Google. The opinions expressed in this commentary are solely those of the author.