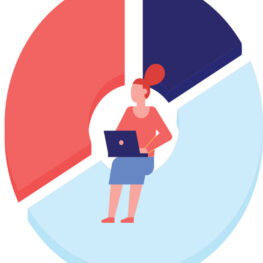 Learn programming languages that are used in Data Science.

Python – Decision Structures: This module will introduce how to build a more versatile and interactive program that can do more than a single task, we can add decision structures such as the if-else block to allow the path of the program take alternate paths depending on the outcomes of each decision. To accomplish this, the conditional statement is introduced. A condition can be evaluated as either True or False depending on the presented situation.

Python – Functions and More: This module will introduce the creation of basic as well as advanced Functions to help break up code chunks into reusable blocks of code to increase readability of a program.  In addition, the Dictionary data type and Python’s associative arrays will be examined and compared to Lists.

Python – Loops and Lists: This module will introduce how lists are used, for-loop and while-loop structures in Python programming. This module will also cover random number generations using loops.

R Programming Basics: In this module, we will introduce how to import and export data files, create vectors and data frames, and edit data frames.

R Programming – Data Manipulations: In this module, we will introduce data wrangling and functions in R.

R Programming – Logic Statements: In this module, we will introduce the conditional statement, loops, and matrix operations in R. This module will also cover how to identify data types.

SQL – Functions, Commands, and Views: This module will cover how to use SQL functions to aggregate and group data in SQL queries.  In addition, this module will introduce new SQL commands and how to create views and learn the rules that determine how data is normalized.

SQL – Introduction: This module will introduce the Structured Query Language (SQL). The SQL language consists of commands for manipulating data and databases in a Relational Database Management System (RDBMS).

If you are external to the Minnesota State System, please complete the Interest Form.

Access: 1.) Click below to be redirected to D2L and sign on with your StarID and password. Then, select Self-Registration and choose from the ITCOE courses listed. 2.) If you are external to the Minnesota State System, please complete the Interest Form below.

Register Now to Stay Connected to All Events and Announcements