Aspirations Awards in the News: Breaking into the tech industry’s boys’ club 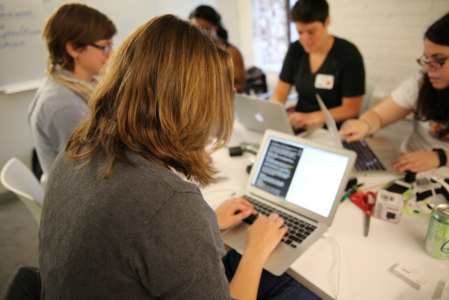 Aspirations Awards in the News: Breaking into the tech industry’s boys’ club

Programs advocating for women in tech in Minnesota are building momentum

The IT industry’s lack of gender diversity isn’t a Minnesota-only problem, and it won’t be solved in Minnesota alone. But momentum appears to be building behind Minnesota-based advocates for women in tech. Thanks to their efforts, the industry’s notorious boys’ club finds itself under serious threat.

Two recent announcements deserve special mention. First, Advance IT Minnesota recently released the names of 30 winners and runners-up in its annual 2016 Minnesota Aspirations for Women in Computing awards, which honors high-performing high schools “based on their interests, accomplishments, and community involvement in computing and technology, as well as for their aspirations in computing and technology-related fields.”

The Aspirations awards also recognized Thomas Reinartz, a Rosemount High School computer science educator who’s overseen an ambitious expansion of his district’s IT education program. He’ll receive his honors alongside the high school winners and runners-up on April 19 at the Vadnais Heights Commons.

Talented students like the latest crop of Aspirations winners and runners-up, along with dedicated educators like Reinartz, are doing more than what they love. They’re taking ownership of Minnesota’s economic future — addressing the looming skills gap and keeping up with employer demand for tech talent. If current trends hold, says Advance IT Minnesota, American graduates are projected to fill just 39% of the 1.2 million computer specialist job openings expected for 2022.

To fill the other 61%, American employers need to hire foreign graduates in greater numbers — uncertain at best in the current political climate — or somehow accelerate the rate at which U.S. universities graduate qualified IT professionals.

That’s a fanciful prospect without additional support for women IT workers, who currently comprise just 26% of the computer specialist workforce. Early encouragement in the Aspirations mold is critical — but it alone isn’t enough to solve the problem.

Good thing Advance IT Minnesota isn’t alone. The second big women-in-tech announcement comes from Hack the Gap, an “all-women hackathon” group based in Minneapolis. Hack the Gap just confirmed the date and venue for its second annual hackathon: May 14-16 at Clockwork in Minneapolis. Participants will “pitch their ideas, work with new technologies, write code, hack hardware, and present their project to the community by the end of the weekend,” according to a release.

READ THE FULL STORY at the MINNESOTA BUSINESS MAGAZINE website

About the Pic: Coding at the 2015 Hack the Gap hackathon. (Photo courtesy of Hack the Gap).